The 37th Heart of Mercy Ball was held at the Hilton Chicago on Nov. 9, 2019 with over 800 guests in attendance. The event raised more than $1 million for Misericordia, which since its founding in 1921, has provided comprehensive support and services to children and adults with intellectual and developmental disabilities on its 31-acre campus in the West Rogers Park neighborhood.

The event celebrated Sister Rosemary Connelly’s 50th anniversary as Misericordia’s executive director and her 70th year as a Sister of Mercy. The fundraiser included moving awards presentations, a silent and live auction, and a very special performance by the Misericordia Heartbreakers.

The Tom and Ann Higgins family was the recipient of the Sister Rosemary Service Medallion Award. Son Peter Higgins accepted the award on the family’s behalf and spoke about his sister Mary, who has been a resident since 1998. “When Mary was born, we learned that she had Down syndrome, which at the time was unknown and a little scary. But my mom and dad were thrilled and always told us, ‘God gives special people to special people.’ She’s a gift in our family,” he said.

The Higgins family (and friends) has supported Misericordia, both financially and through volunteer work, for almost 30 years. Peter Higgins has been a member of the Misericordia Siblings Board of Directors for many years and worked for 8 years as the Brunch Coordinator, in charge of organizing volunteers to work at the weekly Sunday brunches at the Misericordia Greenhouse Restaurant. Peter continues to work as a cashier at the Greenhouse one Sunday per month.

Peter Higgins law firms, past and present,  have contributed annually to Misericordia fundraising events including The Artist In All (silent auction of artwork made by Misericordia residents held each May at the Chicago Art Institute) and Family Fest (a festival/carnival held each September at the Misericordia grounds in Rogers Park). 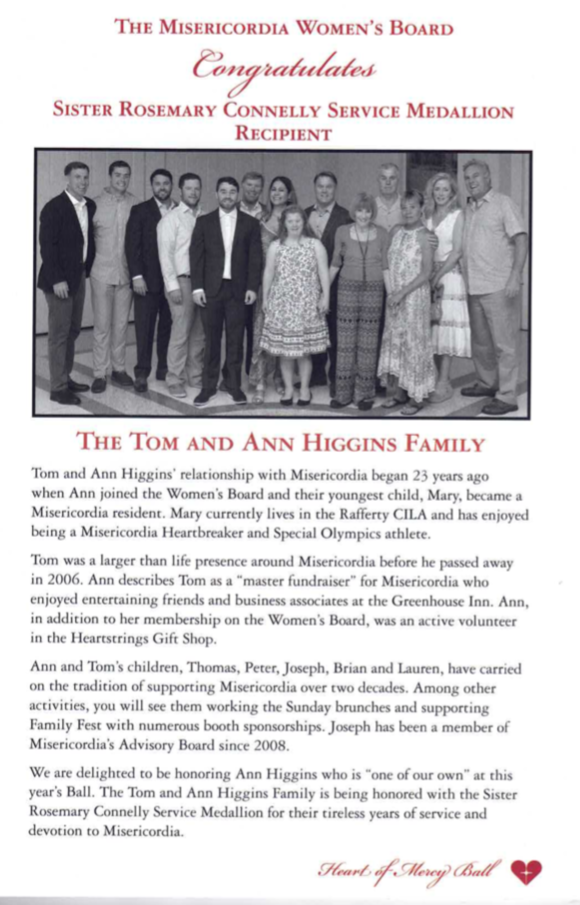 Do You Have a Case?